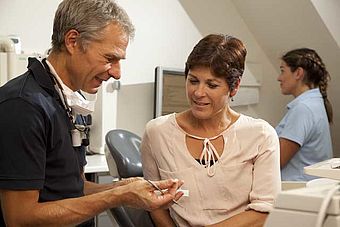 What is a root canal procedure?

Root canal treatments are done in the area inside the tooth which is referred to as the pulp tissue (commonly known as the nerve). The nerve is removed, the canal is cleaned and then freed of bacteria. Following this the length of the canal is exactly measured, slightly widened and then filled with an inert material. The purpose of a root canal treatment is to save the tooth by removing the infected or damaged pulp.

Why would you need root canal treatment?

Root canal treatment is needed for two main reasons: infection or irreversible damage to the pulp. Untreated caries is a common cause of pulp infection. The decay erodes the enamel and dentine of the tooth until it opens into the root canal system, allowing bacteria to infect the pulp. The pulp can also become damaged from trauma, a fracture or extensive restorative work. One of the first indications that the nerve is infected is a sensitive reaction to hot and cold. Endodontic treatment can often be quite elaborate and complicated, expecially on teeth with several roots which are often bent, making them difficult to reach.

The tooth has lost a great deal of its supporting tissue and is therefore vulnerable to fractures. For this reason the tooth is rebuilt using restorative measures such as a crown to ensure stability, functionality and aesthetical requirements. A crown should be placed as soon as possible, ideally within a month of the root canal. It's important to get the tooth permanently restored to prevent damage later. The temporary filling you receive is not meant to last.